All proceeds raised from the more than 800 runners and corporate sponsors who participated in today’s PCCW Global Charity Run 2018 at Silver Leaf, Gardens by the Bay, have been donated to Make-A-Wish Singapore, a charitable foundation focused on granting the wishes of children with life-threatening medical conditions.

A full field of runners participated in this year’s unique annual 5km weekday morning run for charity, which is sponsored each year by PCCW Global. The PCCW Global Charity Run in Singapore is a premier event on PCCW Global’s annual Corporate Social Responsibility programme.

The money raised by the event will assist Make-A-Wish Singapore to grant the wishes of children with life-threatening medical conditions, providing them with hope, strength and joy. Whether it’s flying a plane, becoming a dancer or meeting a Formula One racing driver, research has indicated that children whose cherished wishes come true show significant improvements in hope, positive emotions and health-related quality of life. 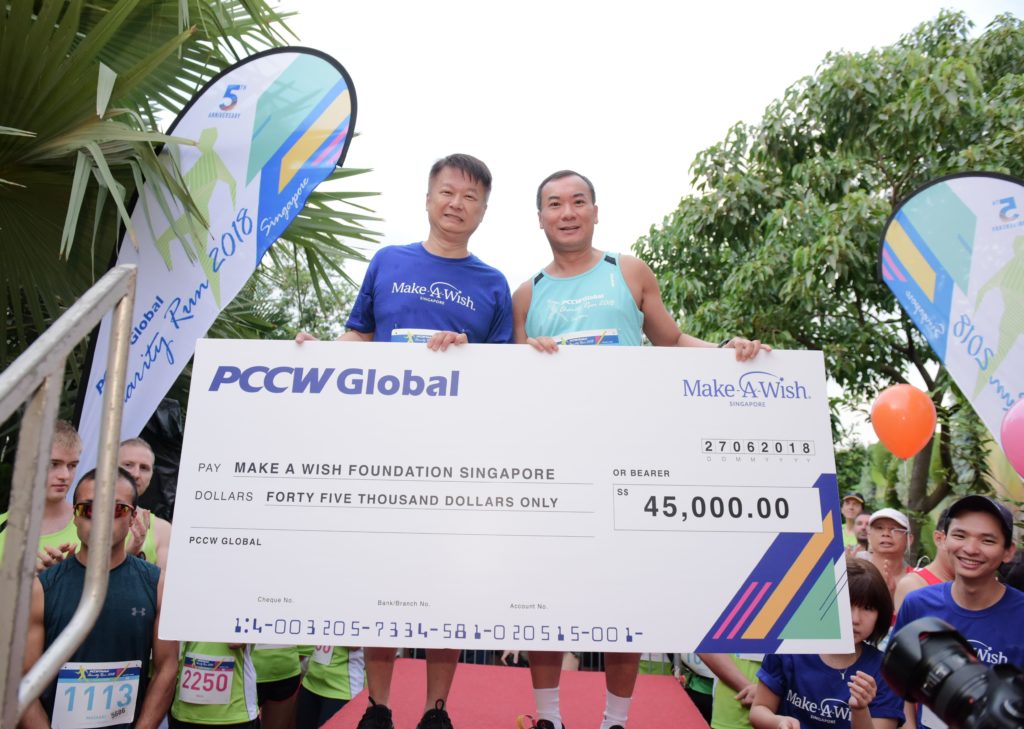 Mr. Chui said, “It feels really good to be back in Singapore, where we had a chance once again to run and also to put smiles on the faces of children in need. I’m awed by the number of familiar faces, from both individual runners and our corporate friends who support this cause year after year. Another great long-term effect of the PCCW Global Charity Run is that our own staff are becoming healthier with all the training they are putting into preparing for the annual run.”

Mr. Quek, said, “Studies have shown that children who have their wishes granted are able to build the physical and emotional strength they need to fight an illness. We are honoured and grateful to have been chosen as the beneficiaries of the annual PCCW Global Charity Run. PCCW Global has been a strong supporter of Make-A-Wish Singapore and the funds raised today will be channelled into fulfilling as many wishes as possible, bringing renewed hope and positivity to our ‘wish children’ suffering from critical illnesses.”

Mr. Mae Chong, a race participant, said, “It feels good to have started the day off with a morning run. Even better, because we as runners have played a part in helping the dreams of critically ill children come true.”

Ms. Rainbow Chow, Assistant Vice President, PCCW Global, who lives in Hong Kong, said, “I’ve been training frequently on weekday mornings for this run and apart from the enjoyment I get from the exercise, I’ve noticed that I generally feel much better and am more alert throughout the day.”